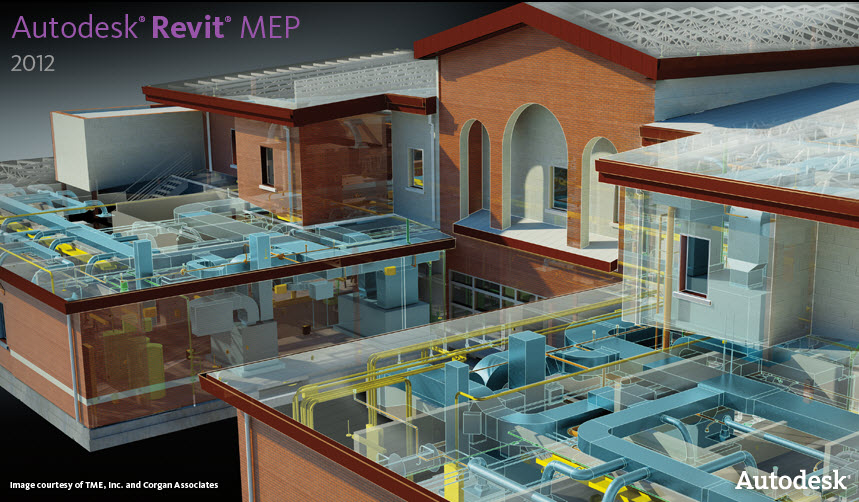 LEBANON, TN - December 2009 - In response to popular customer demand, Lochinvar® has developed a library of families of its commercial and residential products that are fully configured for placement in Autodesk Revit 2010 building information models. Architects, contractors and designers using the 2010 edition of Revit software, which allows them to design with parametric modeling and drafting elements, can now download the pre-programmed, 3D Lochinvar equipment models for free at

"After hearing from many of our customers who use Revit on a regular basis, we developed this library in response to their requests for Lochinvar components designed for use with the software," stated Jeff Vallett, executive vice president at Lochinvar. "Now, they can complete their building designs more efficiently and effectively by having quick, easy and free access to pre-programmed drawings of our high-efficiency equipment."

To download the Lochinvar models, visit the "What's Hot" section on the home page at www.Lochinvar.com. They can also be located under the Products tab, by selecting "Product Documentation" and then clicking on the link under "Revit Product Drawings."

According to "An Introduction to Building Information Modeling," BIM is “a digital representation of the physical and the functional characteristics of a facility.” Unlike 2D or 3D CAD, BIM software utilizes intelligent objects to create models.

The benefits of using BIM applications are numerous, including enhanced interoperability, which will improve integrated building design and integrated project delivery (IPD), according to Dave Conover, a member of the BIM Steering Committee who wrote the guide. Most important, however, is BIM’s ability “to create an accurate model that is useful throughout the entire life of the building, from initial design through occupancy and operation.”

Conover feels that, in addition to the actual benefits of the BIM process, the guide itself offers advantages in that it gives those unfamiliar with BIM “a fast and high level introduction.” He went on to explain that even those already familiar with BIM could benefit from downloading the guide: “It provides some broad level insight into how BIM will affect the building industry in general.”

In addition to BIM’s advantages and tips for getting started with the application, the guide also includes a list of helpful software so that engineers might choose the best program for their company.

An Introduction to Building Information Modeling is available as a free download on ASHRAE’s Web site at www.ashrae.org/publications .

ASHRAE, founded in 1894, is an international organization of some 50,000 persons. ASHRAE fulfills its mission of advancing heating, ventilation, air conditioning and refrigeration to serve humanity and promote a sustainable world through research, standards writing, publishing and continuing education.
Posted by Unknown at 12/19/2009 09:47:00 AM No comments:

Class Description
This class will outline a framework for transitioning to Revit MEP. From setting expectations and defining goals for Revit, building information modeling (BIM) and integrated project delivery (IPD) to plotting the construction documents, we will walk through the checklist of elements required to help Revit really work in your office. Along the way, this class will demonstrate how to defuse the landmines of a Revit implementation, and some clever Revit tricks will be exposed to smooth the transition.

I just got done verifying an process that I've heard mixed issues that result if your workflow process is not correct when using Revit MEP. And it's great news in my opinion.

When you place plumbing fixtures in your Revit Model, it is placed in the Default System.

You can connect multiple plumbing fixtures to each other with pipe, and get all the wonderful flow information - all without adding those fixtures to a specific system that you create. If you select the pipe and look at it's Instant Properties, you can not only see the flow going through those pipes, but you can see that it has a "System TYPE" of Domestic Cold Water and a "System NAME" of Default Domestic Cold Water. Make sure not to confuse the two. 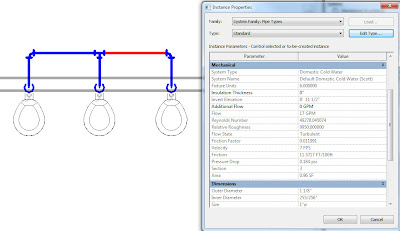 The default View Filter displays System Types of Domestic Cold Water in a blue color. So everything looks good, but there is a limitation of how many plumbing fixtures you can connect to each other that are put on the Default System Name. And that limitation is 50 fixtures.

Below is a thread from Jason Martin at Autodesk explaining the history of this Warning further:

One of the things that is most expensive in the “calculation process” is maintaining the “pressure losses” in sections of a duct or pipe system. To do yhis we divide any connected system into sections at any junction or size change in the system (there are additional reasons for a section to be created, like a resistance change, and I’m sure a few others). For each of the sections we track things like pressure loss, static pressure etc. Maintaining these types of calculations for relatively small sets of elements is relatively inexpensive compared to the time it takes to do things like actually move the things. In systems with thousands of elements, however, these calculations became exponentially more expensive as the element counts increase. We decided at that point that when there are more than a set number of “system assignable-1” elements assigned to a system that we would turn off these types of calculations. After quite a few rounds of testing (as well as some arguing) we decided that a “tolerable” number of elements to turn off these “complex” calculations at was 50. So, now, as soon as the number of elements in a system goes above 50 you’ll get an error message that says something like:

“The default system "Default Supply Air" is now over 50 elements. To improve performance, Revit is no longer calculating the critical path pressure drop and the more complex duct sizing has been disabled. If you want to use these features, you must define logical systems in the model instead of using the default system.”

If you receive this error message it doesn’t have anything to do with things not updating in elevations / sections, and it doesn’t make the application automatically disconnect things. In versions prior to 2009 WU3 (or whichever one it was) it was very true that creating systems improved performance “massively”. Since the introduction of the “50 element” rule, it isn’t as significant as it once was.

For other “performance” things, it really, really, really depends. In 2010 a significant portion of effort was spent on improving the performance of what we referred to as “model manipulation”. This includes things like dragging, connecting, moving, sizing (either with sizing tools or just changing the size), and deleting items like pipe, duct and fittings. As a few others have mentioned here, “model manipulation” in 2010 is significantly faster than it was in previous releases.

System assignable elements are things like air terminals, mechanical equipment etc. Things that when you select them you see a create system button (or edit system button) but don’t include things like ducts, fittings, pipes, etc.

Once you create your user defined system, you can move your plumbing fixtures to that system and they are moved out of the default system.

Your piping properties will now take on that System Name as well. 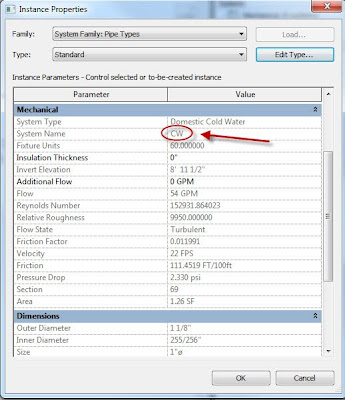 With this, you can create piping annotation tags that can be smart and extract the pipe size and the pipe system. Once I connect a tag to that pipe, it will read, 1" CW. And the tag will automatically update and change if I ever make a change to my design. I don't need to worry about the annotation being incorrect. I like to use these piping annotation tags in my "plot" views for my construction documents.
I also use another piping annotation tag that displays fixture units and flow at certain points of my system in my "modeling" views. That way I can make sure my system is connected, and I'm engineering it properly.
I asked Martin Schmid from Autodesk if you could theoretically put every cold water plumbing fixture in a job in one user defined cold water system, and not have a large performance hit. He says there is a trade-off - and that, even though you can put all of your mechanical fixtures in a user defined system name, the more connections and fittings you have, the longer the calculation time for edits done to the system or its layout. But it's not as bad as when you are using the default system name. Martin tells me that 2010 is faster than 2009 in this process. And you won't notice hardly in smaller jobs.
Another workflow process is that you could break up your systems into CW1 and CW2 and CW3, etc... one for each riser in a particular area. But who wants to have a system name CW4? So you will need to decide if you want to break up your systems, or depending on your project size, computer speed, OS and patience, put all of your fixtures in one user defined system.

Which brings me to the name of the article, Don't Go Half Way. I hear a lot of firms that just want to model certain parts of the building in Revit, and do 2D for the other in AutoCAD. Or they want to just create a 3D model, and not use the flow calculation tools that Revit has. But there are a lot of things going on in the program that if you're not aware of, you run into these limitations such at connecting 50 elements to a default system and you end up creating more headaches than you thought you were going to avoid by taking shortcuts. So go the extra step and create the systems and use them to your advantage. You can save so much more time accepting the full Revit process the way it is supposed to be used, than trying to come up with workarounds and unproven processes of how Revit is not supposed to be used.
Posted by Unknown at 12/16/2009 10:11:00 PM 5 comments:

Class Description
This presentation will give knowledgeable insight about the advantages of using a 3D software program to not only aid in coordination but to save design drafting time. We will take an in-depth look at how to make plumbing design in Revit MEP work for projects by developing a design guideline. There are numerous features inside the Revit MEP program that can help in designing—the trick is to know what you can and can not utilize. The class will benefit plumbing design engineers who are looking to make Revit MEP work for their projects, whether the design is for high-rise commercial office buildings or low-rise lab buildings. Attendees should have plumbing design background and have a general usage knowledge regarding the Revit MEP software.

Autodesk announced that a new US content is now available for Revit MEP customers that are on subscription on the subscription center. The download is called the "US Content Extension for Autodesk Revit MEP 2010"

The US Content Extension for Autodesk® Revit® MEP 2010 software provides new content to help electrical engineers, drafters, and contractors create electrical designs and layouts for projects in the US and elsewhere. Contents include electrical devices for nurse call systems, fire safety, communications, security, and power.
Posted by Unknown at 12/15/2009 05:32:00 AM No comments: